The Enforcer is a hybrid of the DOMINATOR II comms system Atlantic Signal developed initially for Naval Special Warfare Development Group back in 2012. Utilizing tactical bone-conduction technology, originally developed in 1989 by the company along with FBI SOU teams, the Enforcer allows the operator to receive radio comms through his/her facial bones with nothing obstructing his/her ear canals.

When engaged in operations in extremely loud environments, the operator can reach up and disengage electronic earpieces incorporated in the headset, positioning them in each ear. The earpieces provide radio comms and are terminated with custom ear plugs—providing up to 32 NRR hearing pro when properly positioned.

When environmental noise dissipates, the operator can disengage the earpieces and stow them away in the built-in holsters on each sidepiece housing. Receiving radio comms is not negatively impacted, because the operator continues to receive radio comms through the headset’s bone conductors positioned on his/her upper jaw/cheek bones, in front of each ear. Transmit capability is realized via the company’s waterproof/noise-canceling boom microphone.

The Enforcer can be augmented to meet custom control with nearly 20 different push-to-talk assemblies, remote switches, remote volume control mechanisms, and other options so the individual user and team are easily able to create communications equipment that is efficient, yet comfortable and meets their specific operational requirements. 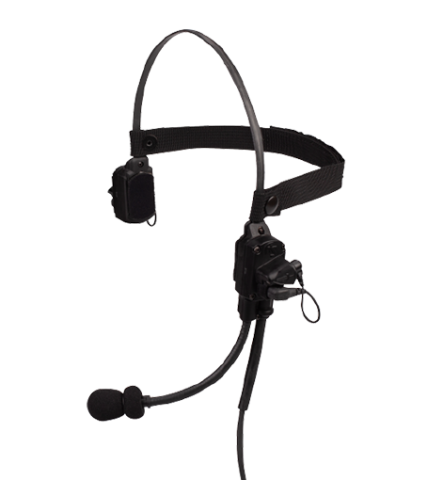 This website and all related files unless otherwise indicated are copyright.
© 2019 Dyplex Communications Ltd.
Web Design by Roddis Communications Inc.